I have trawled a good number of old books and found a few interesting recipes and descriptions of old traditional Scottish Sweets.

The Scots, it has been worked out, eat more sweets than any other people in the world, the Swiss coming a not too close second. The simple explanation of this not altogether enviable reputation is that since 1680, when sugar began to be shipped in bulk from the West Indies, sugar refining has been an important west of Scotland Industry - Greenock on the Clyde being known as "Sugarapolis".

It was generally accepted that sweetie making was an essential for all housewives. At country fairs, the candy man was always in evidence with his wares hanging from his neck on a tray or loaded on a wheel barrow, his voice calling "Here's your fine cinnamon rock, for auld rags, banes, copper, iron, brass or auld broken c-c-c-rystal! Gether, gether up!

All over Scotland, every town, village and street would have its own sweetie shop, the sweetie wives collecting names such as Candy Kate, Sweetie Annie, or Taffie Knott.

Each December, the shops of Crieff are overrun with special sugar mice.

The butcher, the baker, the picture frame maker. Nestled between slippers; lingering over a good book; wearing pearls; draped with scarves; under the mistletoe. Some timorous, showing only their sleekit wee noses; others more gallus, lazing nonchalantly amongst the displayed goods.

But this is not a Health and Safety issue: it is the eagerly anticipated Hunt the Sugar Mice Competition and no Christmas display is complete without one. Seeking them out has become a yuletide tradition for locals and visitors in the know and, with almost 50 to find, it is quite a challenge. The Pied Piper who provides the mice is Graham Donaldson of Gordon and Durward, a business that has had a presence in the town for almost 100 years. 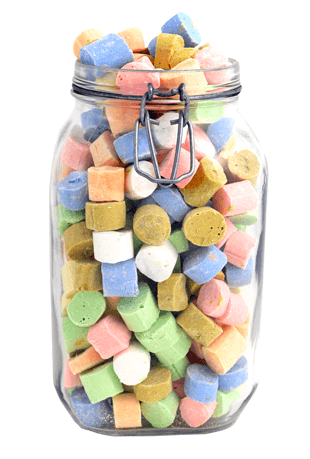 Between 1911 and 1920, Nora Gordon owned and ran a local restaurant. To supplement their income, she and her mother Jean made and sold confectionery. When sugar rationing put a stop to that, they switched to selling kitchen garden and greenhouse fruits grown at Dunira, between Comrie and St. Fillans. A member of the V.A.D., Nora met John (Jack) Durward, originally from St. Cyrus, when he was sent to Ruberslaw House in Crieff to convalesce after being seriously wounded in combat in the Dardanelles.

After their wedding in 1920, Nora and Jack bought the premises of Liptons grocers. The name Gordon and Durward, Confectioners was born and business began to flourish. They soon established a considerable reputation for their hand made products, such as tablet and macaroon, and became the agents for such famous brands as Fry’ s, Cadbury’ s, and Rowntree’s.

In 1928, they added another shop to their portfolio, building a large kitchen in its basement to accommodate the increasing demand for their delicious goods.

In 1947, the Durwards emigrated to South Africa, having sold the business to George and Daisy Anderson. An erstwhile painter and decorator, George soon became known locally as ‘Sweetie Geordie’.

The Andersons proved themselves to be as entrepreneurial as the Durwards. While Geordie continued the sweetie business, Daisy developed a thriving coffee shop upstairs in the premises with the basement kitchen, serving delicious lunches and high teas.

The wholesale side of the confectionery business soon outgrew the capacity of the basement kitchen and John and Pam invested in a small factory.

Forward-thinking though he was, John wasn ’ t always open to innovation. When his teenage son Martin decided to experiment with the fondant for the sugar mice, adding a range of colours and flavourings to supplement the traditional pink and white, John was not amused. However, he had to eat his words when the new range started scampering off the shelves. Instead of the typical purchase of two white and two pink mice, people started buying the full rainbow of colours. So popular did they become that production topped a million mice in the early 1970s.

Another experiment with the mice was less successful. Traditionally, sugar mice had string tails, which had to be individually attached before the fondant hardened. In an attempt to make the whole mouse edible, the Andersons experimented with liquorice. Unfortunately, not only did the liquorice tend to fall out, it also left an unseemly brown-tinted hole.

By the time John and Pam were ready to retire in 1990, the factory building had been sold and production returned to the basement of the coffee shop. With their family grown-up and independently pursuing their own careers, the wholesale business had been reined in, to allow John to spend more time on his real love - restoring vintage Bentleys.

Graham Donaldson is the fifth generation of his family to have a business in the town. What began as a stagecoach service through the Sma’ Glen soon developed into a stables.. When motors replaced horses, the stables became a garage and, eventually, an oil distribution business, which was ultimately sold to Shell.

Graham’s background in hotel management, made him an ideal candidate to take over from the Andersons. Having decided to focus on the confectionery business, the extensive coffee shop premises was put up for sale and the hunt was on for a new location.

Coincidentally, at the shop next door, another long-standing local businessman was also ready to retire - John Low the fishmonger. It was the ideal spot - not only was there a good sized shop, there was plenty of room for a kitchen. Graham replaced the marble wet counter with glass cabinets and lined the tiled walls with mirror and shelves. An inspired decision was to glaze the wall into the kitchen so that customers would be able to see for themselves that the tablet and fudge were still being made in the old copper boiler.

Graham didn’t erase all the evidence of the fish shop, however. An original painting on tiles of a leaping salmon by wildlife artist Edward W Hall, dated 1934, remains uncovered as testament to the shop’s history.

Nowadays, Graham no longer stocks the big-name brands. " Fine confectionery-making is a great Scottish tradition, and I’ d rather support the few remaining Scottish manufacturers who are keeping that tradition alive,” he says. Accordingly, the shop is a treasure trove of weel kent names like Jenny’s Boilings and Ross’s of Edinburgh world famous for their Edinburgh Rock. Shelves groan under the weight of old fashioned sweetie jars full of Jenny’s Boilings - Soor Plooms, Lucky Tatties and Horehound Rock just a wee sample of the huge selection of old favourites.

Graham and his wife Caroline have worked hard to build up the wholesale business again.

Although competition from global brands may be tough, high profile customers like Dobbies Garden Centres and the House of Bruar prove that there is a market for good quality, traditional confectionery.

To stay competitive, Graham makes sure he keeps a weather eye on trends. His stall is always a major attraction at the monthly Perth Farmers’ Market and it is now possible to buy his goods from anywhere in the UK thanks to his comprehensive website. www.scottishsweets.co.uk.

The business may have developed and changed over the years but it retains its most enduring feature - the wonderful aroma that it brings to the town. Whether it’s the deliciously warm smell of chocolate on enrobing day or the mouth-watering fragrance of coconut being toasted for the macaroon, it is impossible to resist.

And what of the famous sugar mice? With demand still reaching 200,000 a year, they are definitely not an endangered species.